Kirk Mendenhall woke up a AAA crowd with a single, stolen base; Saw six seasons, never made bigs

The Toledo Mud Hen crowd needed reawakening and Kirk Mendenhall's single and stolen base did it, The North American Review wrote in a feature on minor league baseball during the 1994 strike.

The writer then chronicled the wave starting up as the next batter decided the contest.

"At this moment batter Shannon Penn singles home Mendenhall and the Mud Hens win the game," The Review wrote. "It's a triumphant moment."

Mendenhall helped spark that moment in his fifth season as a pro. He got into one more. He didn't make the majors.

Mendenhall's career began in 1990, taken by the Tigers in the 36th round of the draft out of Westminster College in Missouri.

He started with the Tigers at short-season Niagara Falls. He hit .249 in 63 games and stole 16 bases.

Mendenhall played much of 1994 back at AA with the Tigers, at Trenton, where he scored the winning run in a July game. He also got 10 games at AAA Toledo. He went 10 for 35 there. 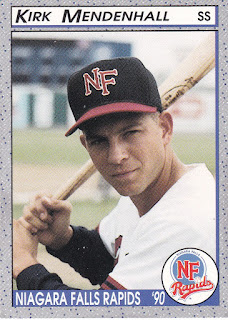