Tom Drell got off to a good start at high-A, then he walked away; He no longer found joy playing

Tom Drell started his 1992 season strong. In his first 10 appearances at high-A Lakeland, he gave up just a single earned run over 17 total innings pitched, for a 0.53 ERA.

Then, he quit. He walked away, The Palm Beach Post wrote.

"A lot of people will probably say I'm nuts, but I really felt like I wasn't being productive as a baseball player," Drell told The Post that July. "I wasn't really happy playing the game. That's the most important reason."

Drell's career began in 1990, taken by the Tigers in the 17th round of the draft out of Florida Southern College in Lakeland.

Drell played his high school ball at Florida's Jupiter Christian. He picked up two hits in one win for them, while also striking out 10 on the mound.

Drell then signed with Florida Southern for college. He told The Post in May 1987 that he was drawn by the school's facilities.

"They have a great tradition of winning," Drell told The Post then. "I liked the area and the school."

With the Tigers, Drell started at short-season Niagara Falls. He went 2-7, with a 4.01 ERA. That July, he spoke to The Tampa Tribune about the nerves he felt starting his pro career.

"I was pretty nervous my first time out, but now it's a lot better," Drell told The Tribune. "I've gotten past that initial shock of being here." 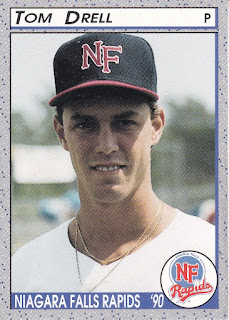