Genaro DeBrand played at three stops over his first season; He didn't come back for a second

Genaro DeBrand traveled a lot over his career, at least compared to its length.

DeBrand played at three stops in his first year in the pros - short-season Niagara Falls, rookie Bristol and high-A Lakeland - along with his route from his native Dominican Republic to the U.S.

But that first season, along with his travels that year, proved the extent of his pro career. His career consisted of that single season, 50 games played.

DeBrand's career actually began in 1988, signed by the Tigers as a free agent out of the Dominican Republic.

DeBrand also got his own card at Niagara Falls. The card back provides some more information on him as a person: The person he most wanted to meet, the wrestler Ultimate Warrior. His favorite big leaguer? Tony Pena. And his favorite TV show? Arsenio Hall.

DeBrand also saw an appearance at Lakeland. By late August, he arrived back at Bristol, his arrival noted in an entry in The Windsor Star. He actually played 32 total games at Bristol. He it .230, with one home run. That home run was his only one in the pros. 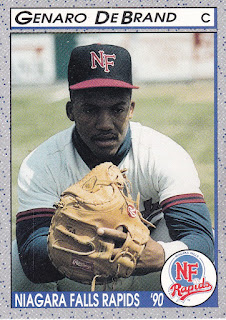