Denny McNamara started to hit the ball well in first pro season; Saw three in all, topped out at high-A 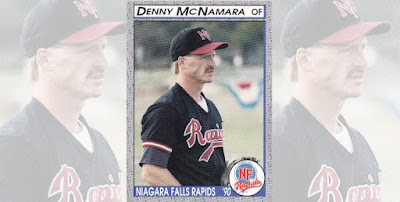 Denny McNamara arrived at short-season Niagara Falls out of the draft in 1990, but his stay proved brief. They needed him up at single-A Fayetteville, Central Michigan Life wrote.

"He was just starting to come around. Those numbers are really deceiving," Prohaska told Life. "He's starting to hit the ball really well."

McNamara ultimately ended the year with a .230 average in 58 total games played. He played in two more seasons. He topped out at high-A.

McNamara's career began in 1990, taken by the Tigers in the 35th round of the draft out of Central Michigan University.

McNamara went to Central Michigan out of St. Francis de Sales High in Toledo, Ohio. He made the school's Hall of Fame in 2000 for his work on both the baseball and football fields.

McNamara also made the Central Michigan Hall of Fame in 2002. He made first team All-American and conference Player of the Year in 1990. He once hit in 28-straight games, a school record. He also had 194 career hits and 31 home runs, both still top 10 at the school.

He hit one of his home runs to help his team win the 1988 conference championship. He hit a two-run home run in a May 1990 loss at Florida State in the NCAA regionals.

With the Tigers, he started at short-season Niagara Falls. He went 8 for 41 before moving to single-A Fayetteville. He then hit .230 over 48 games at Fayetteville.

McNamara later served as a youth coach, including spending time as an assistant coach at Timber Creek High in Orlando. 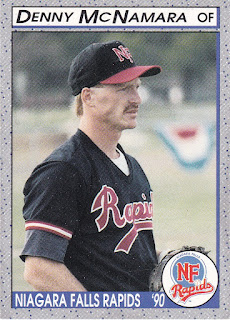