Steve Wolf threw one complete-game shutout for AA London in 1991. He then went out in his next outing and almost did it again, according to The Lima News.

Wolf made it to the ninth inning of the second game, but gave up a two-run home run. He still picked up the 6-2 win, according to The News.

Wolf pitched those two games in his second season as a pro. He went on to see two more campaigns, including a three-game stint at AAA Toledo. But Wolf never made the majors.

Wolf's career began in 1990, taken by the Tigers in the sixth round of the draft out of Fresno State University.

Wolf s tarted with the Tigers at short-season Niagara Falls and single-A Fayetteville. He went 9-2 on the year, with a 2.30 ERA. At Niagara Falls, he went a perfect 5-0 over six starts and gave up only two earned runs in 32.2 innings of work. 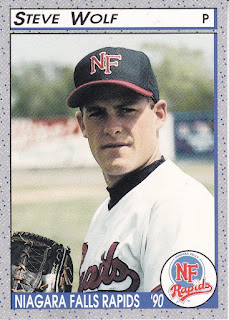