Originally published March 18, 2016
Just two seasons into his pro career, Gino Tagliaferri called it quits in spring 1991, according to The Los Angeles Times.

Tagliaferri just didn't play as well as he'd hoped, he told The Times.

"When people find out about it, they say, 'What!' Everybody knows me from baseball," Tagliaferri told The Times. "But I've never lost so much confidence in myself so fast. I was too unhappy to handle it anymore."

Though he reconsidered later that year, Tagliaferri's career ended after those two seasons. He didn't make AA.

Tagliaferri's career began in 1989, taken by the Tigers in the third round of the draft out of Kennedy High School in Greneda Hills, Calif.

At Kennedy, Tagliaferri hit 23 home runs in his high school career, but he didn't get one in the sectional championship played at Dodger Stadium his senior year in 1989.

"Yeah, I'm disappointed," Tagliaferri told The Times about not getting a home run at Dodger Stadium. "I wanted to hit one. It was on my mind. But I'll take an 0 for three to get a victory."

Tagliaferri signed to play his college ball at Fresno State, but then the Tigers came calling. He chose pro ball over college.

With the Tigers, Tagliaferri started at short-season Niagara Falls. In 33 games, he hit .173. He also had three home runs and 15 RBI.

He then moved to single-A Fayetteville for 1990. He also saw time back at Niagara Falls. Between them, he hit just .192, with eight home runs and 44 RBI. He went 0 for 3 in an April game for Fayetteville.

Tagliaferri told the Tigers the next spring he was done. By August, though, he wanted back in. The Tigers welcomed him back and he intended to play the next spring, The Times wrote.

"I miss the game," Tagliaferri told The Times. "I feel like I felt in high school. I have that same cocky attitude back."

While Tagliaferri may have returned in spring 1992, he didn't make a roster, ending his career for good. 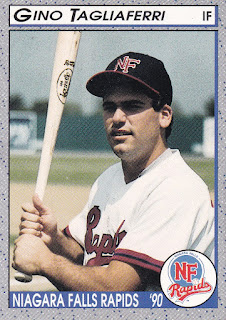