Greg Coppeta made his college's Hall of Fame; Played four pro seasons, topped out at AA

Greg Coppeta had a good career at the University of Southern Maine, but a tough inning this day in May 1990, according to The Bangor Daily News.

He'd gone 8-0 on the year and 21-1 on his career at Southern Maine, but he gave up seven runs in the fourth inning of this game, including a grand slam, The Daily News wrote.

"It was a fastball as far inside as it could be and still be a strike," Coppeta recalled to The Daily News of the grand slam pitch, whose record slipped to 8-1 and 21-2 in his career.

Coppeta ended his three-year run at Southern Maine with a 23-2 record and a 3.36 ERA. He also ended it as a pro. His pro career lasted four seasons. He topped out at AA.

Coppeta's career began that year in 1990, taken by the Tigers in the ninth round of the draft out of Southern Maine.

At Southern Maine, Coppeta won All-American honors twice and helped the school to its first Division III College World Series birth in 1989 as he went 9-1, with a 2.48 ERA. He made the school's Hall of Fame in 2001.

Coppeta started with the Tigers at short-season Niagara Falls. He went 5-7 over 14 starts, with a 3.21 ERA. He walked in a run in an August loss against Pittsfield.

Coppeta soon returned home to Maine. In 2019, Coppeta served as head coach of a summer collegiate league team, the Patriots. After a July 2019 win, Coppeta assessed to The American Journal why his team won.

"We played a pretty clean game defensively," Coppeta told The American Journal. "It was a good team game. These guys are good kids; they like playing baseball. It makes it real fun." 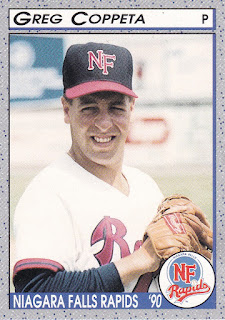