Asked by his old school about his favorite memories of playing there, Doug Marcero turned to his final year at the school.

That year, 1989, Marcero's Western Michigan squad won the conference championship and made the NCAA tournament.

"Obviously my last year was exciting when we won the MAC Championship," Marcero told WMUBroncos.com. "That was the best part the year, going to regionals and playing at the University of Texas. That felt like we hit the big time there."

Marcero soon made the bigger time, in the pros. His pro career, though, lasted three seasons. He topped out at high-A.

Marcero's career began that year in 1989, taken by the Tigers in the 27th round of the draft out of Western Michigan.

At Western Michigan, Marcero went 11-0 in 1989 and won conference Pitcher of the Year honors as the team won a school record 39 games. The school inducted him into its Hall of Fame in 2018.

Marcero started with the Tigers at short-season Niagara Falls. He started 15 games and completed three of them. He went 5-4, with a 3.15 ERA.

His 1989 season proved his only complete campaign. He returned to Niagara Falls in 1990, but saw only two starts. He gave up six earned in 7.1 innings.

He then came back for 1991 at high-A Lakeland. He saw two relief outings there and gave up six earned in 1.1 innings of work to end his career. 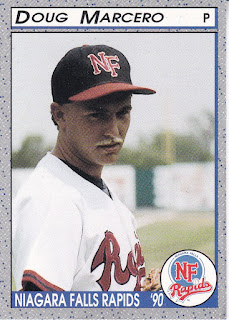