Brian Nelson recalled one of his old teammates at George Mason, Royals General Manager Dayton Moore, in 2014 to The Attleboro Sun Chronicle.

The occasion was Moore's Royals taking the field in the World Series.

"He was on the phone in our apartment daily talking to scouts," Nelson recalled to The Sun Chronicle. "He knew his stuff way back then - he is a very intense and dedicated baseball."

While Moore went from college into coaching, scouting and continued on in the game from there, Nelson went on from college to play in the pros. Nelson's playing career consisted of three pro seasons. He topped out at short-season.

Nelson's career began in 1990, taken by the Tigers in the 16th round of the draft out of George Mason.

Nelson played his high school ball at Attleboro's Bishop Feehan. He made the school's Hall of Fame in 1998.

Nelson played his first season with the Tigers between short-season Niagara Falls and rookie Bristol. He saw 17 outings overall and started one. He gave up 42 earned runs over 27 innings for a 14.00 ERA.

Nelson isn't credited as pitching again until 1995. He saw 32 total outings that year between independent Pueblo and Amarillo. He went 2-4, with a 5.23 ERA to end his career. 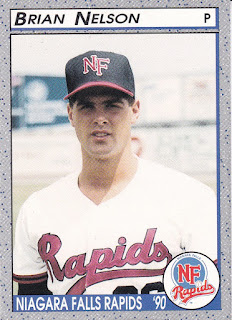