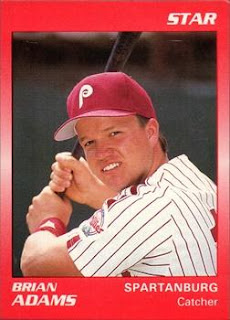 It still appears there nine times.

From that college career, Adams turned pro, taken by the Phillies in the 31st round of the 1989 draft.

At Otero, Adams played in 1988 and 1989, leading the team in at bats both years, now third and fourth all time for the school.

He scored a still school-record 76 runs in 1989, banged out the two most prolific seasons in terms of hits in school history. He also still holds the school record for RBI by a wide margin, knocking in 101 in 1989. Only one other person has even knocked in more than 66.

Out of that, Adams joined the Phillies, starting at rookie Martinsville. He played just four games there, then played 20 others up at single-A Spartanburg. Between them, he hit .228.

In one June game with Clearwater Adams hit a two-run double to help Clearwater to a 6-1 win. Adams didn't have enough of those hits, though. By season's end, Adams' brief career also ended.