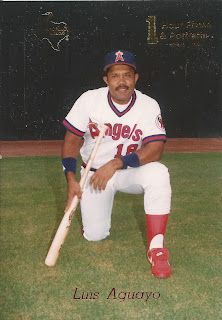 Luis Aguayo hit 37 home runs over his 10-season major league career. On one night in May 1987, he hit two, one a go-ahead solo shot late, UPI wrote.

"I'm never thinking home runs," Aguayo told UPI. "The first was on a low changeup. Then I got a slider. I got better wood on the second one."

Aguayo wrapped up his playing career by 1992 and then embarked on a new career thinking about a lot of things baseball as a coach and manager. He even made it back to the bigs with the Mets in 2008 as a base coach.

Aguayo's career began in 1976, signed by the Phillies out of his native Puerto Rico.

Aguayo started at single-A Spartanburg and short-season Auburn. He made AA Reading in 1978 and AAA Oklahoma City in 1979. He then debuted in Philadelphia in 1980.

"I was sitting on a breaking ball," Aguayo told UPI. "Because that's what he usually gives me with two strikes. He tried to sneak a fastball in and I just reacted. I had good contact."

Aguayo moved to the Yankees in mid-1988, then closed out his major league career in 1989 with 47 games played with the Indians. He then played three more seasons in the minors, including 1990 with the Angels at AA Midland and AAA Edmonton, to end his playing career.

Aguayo then joined the Red Sox at AAA Pawtucket for 1993 as hitting coach. He became manager for the Gulf Coast League Red Sox in 1997, then the short-season Lowell Spinners in 1999.

He then spent time in the Reds and Mets organizations, before landing with the Cardinals as manager of high-A Palm Beach in 2010. In 2012, Aguayo managed the single-A Quad City River Bandits. He later became the St. Louis international field coordinator.

In 2008, as third base coach for the Mets, Aguayo explained his approach to The New York Times.