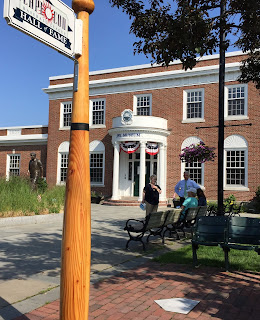 HYANNIS, MA. - Sometimes the middle of winter can be the best time to revisit the summer. Sometimes your wife can spot something cool that you didn't even think to look for.

Back in July, my wife and I traveled to Cape Cod. It marked our third trip to the cape, but our first during baseball season.

We ventured to Hyannis on this trip, bringing our bikes. We also planned to attend a Harbor Hawks game and our hotel was within biking distance of the field.

As we're biking through downtown, past what I'm thinking is solely a John F. Kennedy museum, my wife spots a bat and a sign: Cape Cod Baseball League Hall of Fame.

Our bike trip quickly went on pause and we went inside. It had everything you could want from a legendary league Hall of Fame. It soon even had an actual team.

We got to look around for a bit (or I did, I think my wife waited elsewhere). But then the Wareham Gatemen stopped by. Hyannis' very opponent that evening, Wareham.

It turns out the team stopped by to see the Cape Cod League greats on their way to the game.

So I got to get pictures of some cool Hall exhibits that include players featured here and see some Wareham players viewing tales of the league's best.

Our visit to the Cape Cod Baseball League Hall of Fame: (Links go to the player's feature)