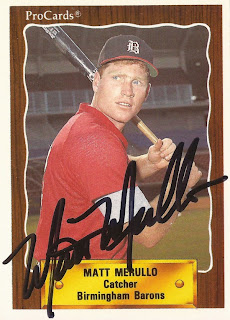 In the moment, Merullo quickly wrote something on the bill of his cap and flipped it to his father.
"He was about 10 rows back, hanging around the dugout and I was able to get over some fans' heads," Merullo recalled recently to The Greatest 21 Days.

The note, Merullo said, had meaning to both. It also marveled at the moment.

The message: "What fun."

"The last word," Merullo explained of his father's advice, "was always 'go have some fun, just some fun,' whether he was coaching third on a team that I was playing on, or he was dropping me off in the car."

What he was telling his father was clear: Merullo was going to go out that day and have some fun.

Merullo spoke with The Greatest 21 Days recently before his short-season Aberdeen Ironbirds took on the Tri-City Valley Cats in Troy, NY. Merullo took the helm of the Ironbirds for 2013 after several years spent as a scout.
Merullo spoke of his time growing up in New England, playing youth baseball and then going on to play in college in North Carolina.

He also spoke about his transition to the pros, his later unexpected call up to the majors and early success, and efforts to get back and stay back.

Helping him get there was his family, a baseball family. Both Merullo's father and grandfather played the game. His father Leonard Merullo, who caught that inscribed hat, played several seasons in the minors. His grandfather, Lennie Merullo, made the majors in seven seasons, from 1941 to 1947, all with the Cubs.

Merullo said he was fortunate enough to have some skills growing up. He was physically active and loved the game.
Merullo traced his love for the game back to his grandfather, learning the individual challenges that happen amongst a team, that there is always another day and to make sure that a good day followed a bad day.

But, coming from such a family wasn't a free ride to the pros, Merullo said.

Merullo recalled being in Little League and doing well, but getting the suggestions so he could do it better and at a higher level.

But, in the end, he was also happy to receive that information.

"There were times where it didn't always come easy, but the people, the support that I got, the knowledge and information that was right there for me, coming from my family, was just a tremendous asset," Merullo said, "and I'm really thankful for that."

It also helped that Merullo was big for his age, 6 feet, 1 inch, 165 pounds at the age of 14. He recalled being able to take part in his first pro tryout camp at the age of 15.
Around that time, Merullo was also able to spend a couple weeks in the summer with his grandfather, who was a scout. His grandfather took him around the minors and Merullo watche the professionals play.

"I just got a sense early on that I can do that, I think I can do what that guy's doing," Merullo said of seeing the pros. "It was mainly in the hitting department, just being able to swing the bat and hit the ball and kind of copy certain moves and certain actions I saw on the field."

Merullo played well enough in high school and summer ball to get recruited by the University of North Carolina.

At North Carolina, Merullo seemed to get on scouts' radars as they came to see other TarHeel players, Merullo recalled.

"Having been a scout myself, that's how the game works," Merullo said. "You go to watch a couple players, then you see a couple more that tweak your eye that are a little bit younger, then you mark them down for the following year."

Merullo ended up getting drafted in the seventh round of the 1986 draft by the White Sox. That was after a college career where he felt he sometimes pressed too much.

But he recalled just being satisfied he was drafted.

"I was very happy to sign a pro contract, just very happy to be drafted," Merullo said. "I had some things where I could have gone higher, but really, when the phone call came, I couldn't wait for the scout to get there and just get started with my career."

From there, Merullo went and started that pro career. Three years later, he was in the major leagues.

Go to Part 2: Matt Merullo, Got There