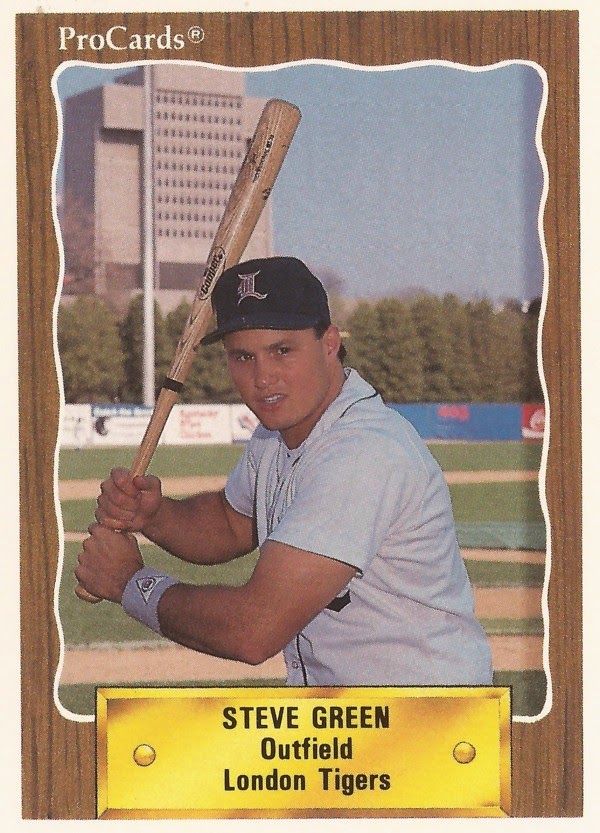 In August 2014, London's Labatt Park was the home to the London Majors, a semi-pro baseball team, along with college and youth programs. It was also home to at least one osprey nest.

From 1989 to 1993, Labatt Park was home to the AA London Tigers, and possibly other osprey nests.

I stopped by Labatt Park in August on my way through to Windsor and on to Iowa. In Windsor, I interviewed former London Tiger and London-native Mike Lumley.

This was the same trip where I stopped by other former minor league parks in Geneva, Welland, St. Catharines and Hamilton. I got through each of them in the same day, getting pictures of each from the outside.
I made it to London that evening, but not before the sun set. That meant I had to stay over and wait for the morning to get pictures. Not only was Labatt Park home to the Tigers in 1990, it lays claim to the title of the oldest continually operating baseball grounds in the world. It opened in 1877.

The only actual parking spots I could see, though, seemed to be across a busy road and it was dark. I'd also had a long day of driving already in and I've never really figured out how to take good night photos. They never turn out. So I made the tough decision to find a hotel and wait for morning.

I then went on to Labatt, thinking I'd just get a couple outside shots and move on to Windsor. I got there and the gate was open and there were a couple people inside. I wandered in to see if they might let me take a few shots around the stadium.

One of the guys came over. I thought he might ask me to leave. But I asked. He was totally cool with it. Actually, he seemed to be more interested in pointing something out. Over on the third base side, on top of one of the light poles was the osprey nest.

So, here are my pitchers from my visit to Labatt Park in London, Ont.: