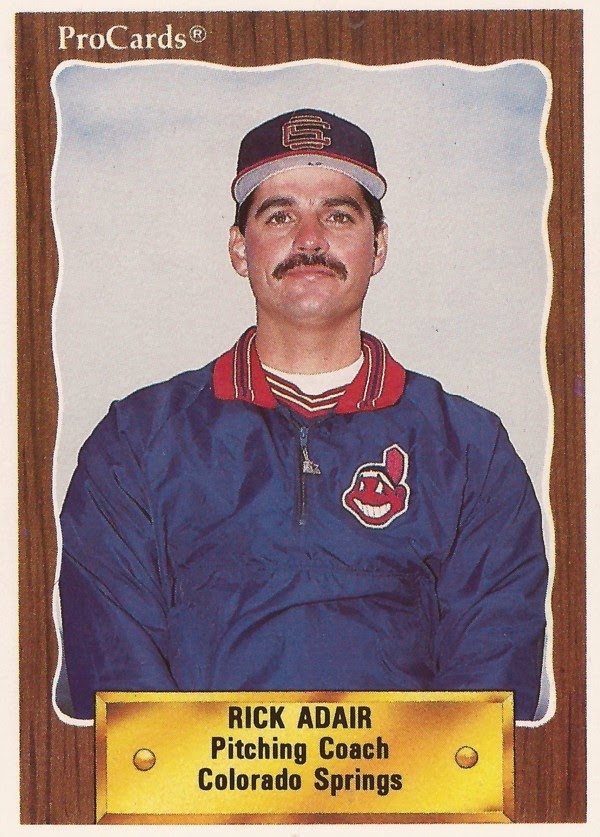 Playing for the Wausau Timbers in July 1981, Rick Adair picked up his 10th win, going 7.1 innings and giving up four hits, The Milwaukee Journal wrote.

He also picked three runners off first, two in the same inning, The Journal wrote. Adair estimated he'd done that 25 times that season.

"I never realized how important it was to hold a runner close to the base until I went to spring training," Adair told The Journal afterward. "It really helps you in clutch situations."

Adair's playing career wound end in 1985, after seven sometimes injury-plagued seasons. It would also end short of the majors. But he would take the lessons he learned as a player with him, putting them to use as a pitching coach and coordinator in the quarter-century since.

He would also take those lessons with him as a pitching coach in the major leagues.

Adair started his career, selected by the Mariners in the third round of the 1979 draft. He got as high as AAA Salt Lake City in 1983 then wound end with consecutive seasons at AA Chattanooga.

Among the pitchers he worked with was Jack Armstrong. Under Adair's instruction, Indians Manager Mike Hargrove told The Associated Press, Armstrong learned to loosen his grip a little. By August 1992, Adair was out as Indians pitching coach.

"Mike Hargrove and John Hart gave me a chance," Adair recalled years later to The Seattle Times of his Cleveland experience, "and I was totally, totally overmatched. It took me 100 games to realize I was in a big-league uniform. They took a chance, and I got fired the next year. And rightfully so! I've learned a lot over the years."

He also took his new pitchers back to basics. He had them take batting practice, The Toledo Blade wrote that May. With Adair back on the mound, he threw them inside, then came back outside, showing them the difficulty of hitting that combination.

"These are American League pitchers and they don't get a chance to hit," Adair told The Blade. "It's easy to forget how a batter feels."

Among the pitchers he saw at Toledo was Kent Bottenfield. While Bottenfield wouldn't make Detroit, He would go on to six more seasons in the majors.

In 1999, Bottenfield won 18 games. And he credited the time he spent with Adair four years earlier with helping him get there.

"He changed my delivery," Bottenfield told The AP in June 1999. "He taught me how to study hitters and make adjustments. He was the best thing that ever happened to me in the game of baseball."

By 1999, Adair was finishing up his second stint in the majors, four seasons with big club in Detroit. He was let go that July.

There, he helped Jarrod Washburn with his delivery, getting him to stick his butt out, The Seattle Times wrote. He'd been collapsing his backside in his delivery.

Adair, along with his manager Don Wakamatsu, however, were let go in August 2010. He has since signed on with for 2011, with the Orioles, as a bullpen coach. He stayed with the Orioles through 2013.

Back in 1993, speaking to his hometown Spartanburg Herald-Journal, spoke about his injury-shortened playing career and his coaching career to that point.

"Sometimes, things don't work out," Adair told The Herald-Journal that August. "You have to go on and make the best of the situation."