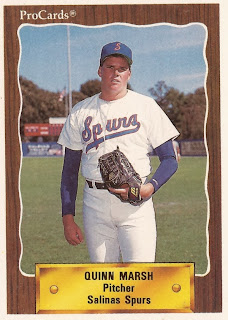 It was the longest winning streak in the history of organized baseball at 29 games and Quinn Marsh helped break it.

Coming on in relief in the eighth inning in this July 1987 game against the Salt Lake Trappers. Marsh got out of a bases-loaded jam, then completed the ninth, getting the first two outs on a double play, saving a 7-5 Billings victory, according to The Deseret News.

"They kept pecking away getting runs," Billings manager David Keller told The News afterward, "and that double play ball (with none out in the ninth) really helped us."

That save for Billings ended up being Marsh's only save on the year and one of only seven he recorded over his professional career. It was a professional career for Marsh that lasted just five seasons, never making it above single-A.

Marsh's pro career began in 1986, taken by the Reds in the 23rd round of the draft, out of Utah Technical Junior College.

With the Reds, Marsh started in the rookie Gulf Coast League. Over 18 relief outings, his ERA topped 9. He returned to the GCL for a game in 1987, then moved on to the rookie Billings Mustangs. With the Mustangs, he dropped his ERA to 4.31 over 19 relief outings. He also got that one save.

For 1988, Marsh moved up to single-A Greensboro, putting up a 3.63 ERA there, with three saves, over 33 outings. His 1989 campaign was spent at single-A Cedar Rapids. He picked up six wins over 49 outings, three starts. He also saved another three and came in with a 2.03 ERA.

Marsh's final season came in 1990. He was loaned by the Reds to the independent Salinas Spurs of the California League, spending the season rehabbing an injury. He also got two outings at Cedar Rapids. It was his final pro season.

Marsh is now back in Utah, working as a vice president at Access Technology Solutions and Logistics. In 2012, to the blog Baseball Cards Come to Life!, Marsh recalled that save he got with Billings to end Salt Lake's record streak, noting his own roots in Utah.

"I happened to be from Bountiful, Utah," Marsh told the site, "so hometown kid breaks the streak while playing for the Billings Mustangs."