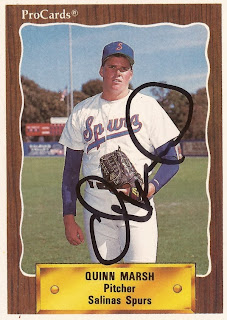 Quinn Marsh was a good player in high school. He played three sports. But he just wasn't that big.

Upon graduating high school in Bountiful, Utah, Marsh was small, just 5 feet, 8 inches tall and he had a fastball to match, maybe 75 mph.

After walking on at the local junior college, Utah Tech, Marsh started to grow. By the time he was done, he was 6 feet, 4 inches tall, with a fastball in the low 90s.

He was also a pro prospect.

"It all kind of just happened," Marsh recalled to The Greatest 21 Days recently. "No way did I ever imagine that I would be a professional baseball player."


But he was. And he played five seasons as a pro, making his way through the Gulf Coast League, Midwest League and, finally, the California League. He also played in Mexico and in Australia, before an arm injury ultimately ended his career.
Along the way, Marsh had his own hand in stopping a historic winning streak, one by his hometown Salt Lake Trappers. It was the Utah-native Marsh who was on the mound for rival Billings in July 1987, closing out Salt Lake and stopping the Trappers' record 29-game winning streak.

Marsh spoke to The Greatest 21 Days by phone recently from his Utah home. He spoke of growing up in Utah, learning the game from his family, then heading to college and seeing scouts watch him for the first time.

He then got drafted and made the adjustment to the pros. Marsh spoke of his successes, and ultimately career-ending injury, as well as his attempts to come back from that injury while rehabbing on loan to the independent Salinas Spurs in the California League and then his realization that the career he never expected to have was over.

Marsh grew up in Bountiful with two older brothers who were both baseball players. Marsh recalled when they played, he'd be the bat boy. Soon, he was putting on a uniform with them.
"I fell in love with the game, and I'm still involved in the game now, and I'm 47," said Marsh, who is a volunteer youth coach on the side.

For Marsh, pitching was a natural thing. He just loved the competition of it, he recalled.

"It was me against the batter," Marsh said. "I was involved in every play, every pitch. I just loved it from the get go. I just loved getting guys out."

And he got them out in high school, just not enough for scouts to take notice. At Utah Tech, Marsh worked with head coach Dave Nelson. He also worked with Bob Keyes, of the Mountain West Baseball Academy.

He counted both as mentors. "I owe it to them, they stuck with me, gave me the opportunity to play," Marsh said.
With that foundation - and that suddenly more-imposing stature - the scouts came.

When they did come, he wasn't even sure they were looking at him, he recalled.

"I thought it was kind of a joke, at first," Marsh said. "Then the reality started setting in. When I started seeing them in the stands, I thought this dream could be coming true."

"And it definitely was a dream," Marsh added. "I couldn't ask for anything more. It was the highlight of my life."

One of the scouts that had interested in March was with the Expos, Marsh recalled. There was enough interest that Marsh thought that was where he'd go in the draft, to the Expos.

Then, a couple days before the 1986 draft, the Reds had a tryout in Salt Lake City. After that, the Reds were in contention, too. Marsh recalled being told he seemed to have a lot of Cincinnati Reds blood in him.

When draft day came, it was the Reds who came calling in the 23rd round.

"As a 19-year-old kid, it was fantastic," Marsh said of getting drafted.
For Marsh, there was no hesitation on what he would do, sign or return to school. He signed.

"I just wanted to play," Marsh said. "I wasn't the greatest student out there, I just wanted to continue my baseball career. I'm very happy I made that choice. I wouldn't be who I am today without the great people I met. What I learned playing professional baseball is unbelievable."

Once signed, Marsh was sent to the rookie Gulf Coast League. He recalled the move as a culture shock, going from Utah to a state and organization with people from all over.

He then set to work, not only fitting in, but also pitching.

"I told myself that I needed to work hard, because this is the elite of the elite," Marsh said.

Once he got settled in, he could help stop the longest winning streak in professional baseball, and do it against his hometown team.