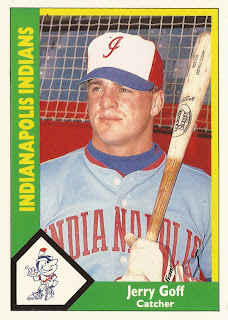 Some people's career trajectories seem natural, with one part flowing into the next. Others, though, not so much.

The 1990 CMC set has its share of natural trajectories, players who went into coaching and managing in the minors, or even in college.

Of the 891 individuals in the set, at least 217 served as a coach at some point or another. With some overlap, at least 114 served as a manager.

There were even at least three firefighters in the set, at least one police officer and even a handful of teachers. 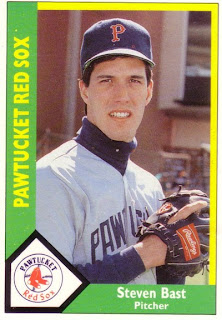 The doctor was Steven Bast, one of my earlier features, redone in August 2011. Bast was in the CMC set as a member of the AAA Pawtucket Red Sox. But he ended up playing in just four professional seasons, 1990 being his last.

By 1996, though, Bast was a third-year resident, studying orthopedics at USC. Baseball, it turned out, wasn't his dream, he told his alma mater's news service that year.

"I always liked to play the game, but that wasn't ever my dream," Bast told the news service at USC.edu in 1996. "I just always kinda used baseball as a stepping stone to get to where I wanted to go."

Rich Thompson played parts of three seasons in the majors, getting 57 relief outings with the Indians in 1985. By 1990, that major league career was over, but he was still playing at AAA, with the Expos at Indianapolis.

Thompson is last recorded as pitching in 1994, in independent ball. By 2009, he was an attorney on Long Island.

Thompson teammate at Indianapolis, Jerry Goff, was one of the at least three set members to go into firefighting. Clay Bellinger, member of the 1990 Clinton Giants, and Steve Peters, member that year of the Las Vegas Stars, also went into firefighting.

Jason Satre, member of the single-A Charleston Wheelers in 1990, has gone on to be a police officer. 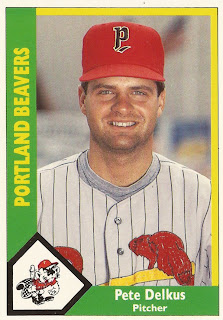 Then there was Pete Delkus.

Delkus played parts of five seasons as a pro, making AAA Portland with the Twins in 1990. His career over, he went back to his college education, where he majored in broadcasting. He soon got himself a TV sports internship, but when a spot in weather opened up, he jumped at it.

Delkus is now the chief meteorologist at WFAA in big-city Dallas. He arrived there in 2005, coming from Cincinnati. In Cincinnati, Delkus made a name for himself in 1999 as the only local meteorologist on the air when a deadly tornado hit at 4 a.m.

"It's just the way I was raised, and something that baseball reinforced," Delkus told MiLB.com in 2006. "Nothing is easy, you have to work for everything. So, with that mentality, my thought was 'This is just TV.' If you work hard, that's part of the job. There are so many parallels between TV and baseball; it really helped me become who I am."