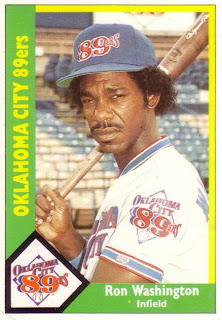 After seven seasons with big league playing time, six of those with the Twins, Minnesota thought Ron Washington might be better off starting his coaching career in 1987, offering him a position as a minor league player/coach, The Orlando Sentinel wrote.

Washington, though, declined. He was still a player, not a coach.

"It happens in the game of baseball and life goes on," Washington told The Sentinel after being released, "but I don't feel like I'm through with baseball. First I want to exhaust all options I have of still playing. If I do that, then I'd be interested in coaching. But first I have to exhaust my playing options."

His time, though, as a coach - and manager - would come.

His coaching and managerial career started shortly after, continuing as manager of the Texas Rangers. In his five seasons at the helm of the Rangers, Washington has amassed an overall record of 427-383.

Washington's baseball career began in 1970, signed by the Royals as an amateur free agent out of high school in New Orleans. His first season came in 1971, in the rookie Gulf Coast League. He hit .291 in 38 games.

He made AA Jacksonville in 1975, then, after moving to the Dodgers system, got his first look at AAA at Albuquerque in 1977.

Washington's first look at the majors also came in 1977, as a September call-up. In 19 at bats, Washington got seven hits.

He didn't make the majors again until 1981, after injuring his knees in 1978. In the meantime, Washington played a year at AAA in the Mets organization in 1979, then arrived with the Twins at AAA Toledo in 1980.

By then, Washington had already had a decade in the pros, with just 10 big league games to show for it. "I've had a lot of adversity," Washington told The Toledo Blade that April.

Washington noted to The Blade then that he entered baseball a year late after being drafted, then, in 1978, he hurt his knees. But he was back then to 100 percent. By 1981, he was back in the majors, finding a home in Minneapolis.

"It was a slider, and I was fortunate to get it up and over the monster," Washington told The Associated Press of the home run. "I happened to do everything perfectly on the pitch. This certainly is one of the big thrills of my career."

Washington ended up hitting a total of 20 home runs in his big league career. But he hit another game-winner in April 1984, put in as a late-inning replacement. This came at home, and was a walk-off.

"You just take your ability up there when you get a chance," Washington told UPI. "Fortunately, I got a chance today."

Washington continued with the Twins through 1986, his playing time diminishing with each season. After his release in spring 1987, Washington signed on with the Orioles, getting into just 26 games.

Washington finished out his major league career with 69 games with the Indians in 1988, then seven final contests with the Astros in 1989.

One more season with the Rangers at AAA Oklahoma City in 1990, and Washington was ready to start his coaching career.

His first year out, Washington served as hitting coach at AAA Tidewater, with the Mets. He got his first managerial job in 1993, at single-A Capital City.

Washington joined the Athletics in 1996, as first base coach. He moved to third base coach for 1997, staying through 2006. His time there included the 2002 season, chronicled in the book Moneyball. Washington was also portrayed in the 2011 movie version.

In November 2006, Washington was named manager of the Texas Rangers.

"I'm going to be a players' manager. My job is solely to make sure that every player on the Texas Rangers feels like they are part of everything going on here," Washington told reporters after he was hired. "As a manager, I'm no good if the players don't get it done. If the players get it done, I'm great."

The World Series runs also came after some more adversity for Washington, some self-inflicted adversity. In 2009, he tested positive for cocaine one time, news that came out in spring 2010. Washington, though, kept his job, gaining support from his players and undergoing weekly drug tests, The Los Angeles Times wrote.

Now, Washington has repaid that support by guiding his team to its second-consecutive World Series.

Talking to The Times about his team's success during the Rangers' October 2011 run, Washington cited his team's attitude, commitment and effort. He also spoke of the role of younger players.
"We've given many opportunities to young kids that, maybe in other organizations, wouldn't have had that opportunity," Washington told The Times. "We nurture our players. We certainly support every one of them throughout the whole organization. That's what it's about when you talk about success."
1990 CMC Tally
Cards Featured: 587/880 - 66.7%
Players/Coaches Featured: 598
Made the Majors: 401 - 67%
Never Made the Majors:197-33%
5+ Seasons in the Majors: 171
10+ Seasons in the Minors: 127
Posted by Steve78 at 8:00 PM