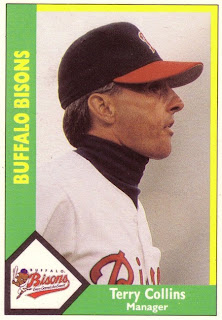 Terry Collins assessed his new team. It was a team of young players not so much different from himself.

"These kids don't have a clue what it's like outside of baseball," Collins told The Los Angeles Times. "I don't either."

It was not only Collins' new team, it was his first team, the California League's Lodi Dodgers. Collins' life in baseball to that point consisted of about eight seasons as a player, spent entirely in the minors.

Now, in 1981, Collins' life in baseball was continuing, starting a new chapter as a manager. It's a life that has continued in the three decades since, Collins eventually making the major leagues as a manager, for three different teams.

But, with a style often described as intense, Collins' first two stints each hardly lasted three seasons. His most recent managerial stint is continuing into its second season, in 2012, as Collins helms the Mets in Flushing.

Collins' long life in baseball began in 1971, taken by the Pirates in the 19th round of the draft, out of Eastern Michigan University. He hit AA in 1973, then AAA in 1975. But he never got called to the majors.

Collins then moved on to manage at AAA Buffalo in 1989. It was in 1994 that he made the jump to the major league managers' office, in Houston. The big league job was what Collins always wanted, he told The Pittsburgh Post-Gazette after he won the post.

Collins spent three seasons in Houston, taking the team to winning records all three seasons. He was fired, though, after a September collapse in 1996, and the thought that the clubhouse didn't work well together, according to The Times.

Collins, though, quickly got a new job, with the Angels. As the Angels manager, Collins took his team to winning records in his first two seasons. In his third, though, he resigned in early September, his team 31 games under .500.

"The bottom line is, the team's got to perform," Collins told The Associated Press after he resigned. "When you don't perform, the manager's accountable. I tried everything I knew, from patting them on the back to try to motivate them to kicking them in the butt."

"A lot has been said about his intensity," Mets GM Sandy Alderson told The AP after hiring Collins. "Certainly that was a factor, an attractive quality for us. His major league managing experience also came into play. But also I have to emphasize that his time spent in player development was also a significant factor. This job is all about leadership, but it's also about teaching."
1990 CMC Tally
Cards Featured: 677/880 - 76.9%
Players/Coaches Featured: 688
Made the Majors: 465 - 68%-X
Never Made the Majors:223-32%
5+ Seasons in the Majors: 201
10+ Seasons in the Minors: 142
Posted by Steve78 at 9:02 PM