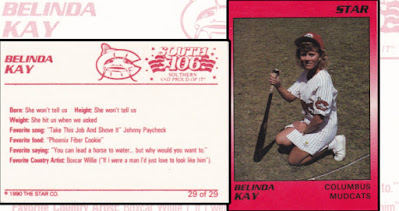 Belinda Kay still had fans, even years after she went off the air at Columbus, Ga.,-area radio station South 106, or at least one.

One a radio discussions message board post nearly two decades after her heyday at the station, a commenter referenced Kay and other former South 106 personalities and wished they could be brought back.

Kay worked at the station, WSTH, in the late-1980s and early 1990s, helming the station's midday show, according to an old Wikipedia entry for the station.

In the middle of her run, in 1990, her station South 106 sponsored a set of Columbus Mudcats baseball cards. And, apparently in exchange for the sponsorship, the station got to place three of its personalities into the set, Kay, Diamond Jim and Mason Dixon, getting the three their own cards.

The most interesting thing about those three sponsor cards is that none of them actually identified them as South 106 talent. The station is identified through an ad on the back, but it's the same ad as on each of the other player cards.

Kay, like the other two South 106 cards, includes information on the back, but none of that information appears to be serious - her birthdate and height listed as "She won't tell us" and weight as "She hit is when we asked."

The listing, however, does have one interesting thing, even though it may also fall into the not-serious category: Kay's favorite food is listed as something called a "Phoenix Fiber Cookie."

What's a "Phoenix Fiber Cookie?" Was that a thing? It turns out it was. The Washington Post called it "one of the hottest weight-loss fads" in the country that supposedly curbed apatite and benefited people elsewhere.

The problem was, The Post wrote, that the FDA found a bunch of problems with their labeling and ordered them off the market. The Post's story is dated May 8, 1990, which is about the time that these card sets were put together.

That aside, Kay appears to have left the radio business may have opened her own store, just across the Chattahoochee River from Columbus, in Phenix City, Ala. The old version of the South 106 Wikipedia page identified her as the owner of Belinda Kay's Health Store there. 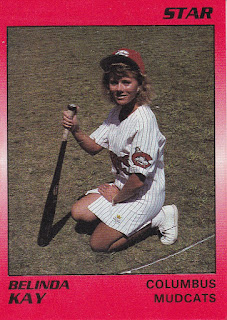