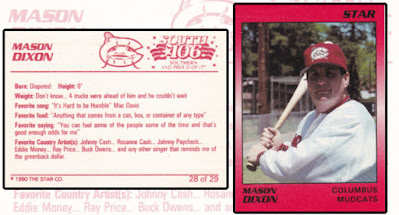 The Gulf War underway in January 1991, The Anniston Star checked in with local radio stations about how their playlists had been impacted, including WSTH in nearby Columbus, Ga.

Station music and programming director Mason Dixon spoke to The Star about the lack of protest music, saying it showed the nation had learned from Vietnam.

"I think the American people realize they made a mistake back then and they're not going to let it happen this time," Dixon told The Star.

In 1990, he got his own baseball card in the Columbus Mudcats Star set, one of three sponsor cards included in the set, along side other South 106 personalities Diamond Jim and Belinda Kay.

Like the others, Dixon's card includes really no actual information about him, or his role at the station. The only thing on the card indicating the radio station is the same "South 106" logo that appears on all the other cards in the set.

The card back also seemingly has a lot of information on him, but none of it appears to be accurate or serious. ("Weight: Don't know... 4 trucks were ahead of him and he couldn't wait")

But searches could confirm his connection to the station, as well as his name and elements of his career.

Madison, as Dixon, was one half of the "Mason Dixon and Johnny Outlaw Morning Show" on South 106, according to a previous Wikipedia entry on the station. The entry also had them as the top-rated show five years running.

In January 1988, The Columbus Ledger-Enquirer did a feature on Dixon, part of a five-part series on local radio shows, according to a photo sold online. Later that year, he made a personal appearance with other personalities at an event advertised in The Star.

By 2007, no longer Dixon, Madison took his music background and started his own country label, Country Trax Records and signed a singer named Jeff Golden. 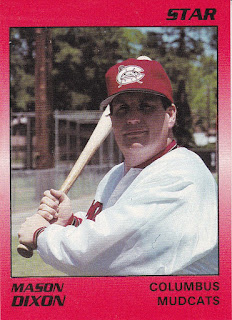