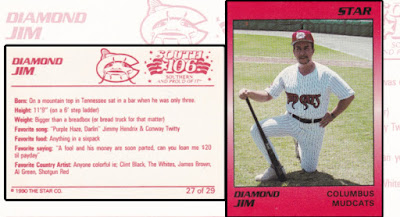 The back of Diamond Jim's 1990 Columbus Mudcats card appears to give very little about the real Diamond Jim, or even his connection to the Mudcats.

His connection to the team, it turns out, appears to have been through the card set's sponsor - radio station South 106 - rather than the team itself.

But, while his card back spins details about this fictional Diamond Jim, (born "on a mountain top in Tennessee sat in a bar when he was only three,"), the real Diamond Jim appears to have been much more interesting.

For one, the real Diamond Jim - James Devitt - was a father of three, worked in radio and in advertising and, perhaps most importantly, earned two Purple Hearts in Vietnam.

Those details come from Devitt's obituary and an article in The Columbus Ledger-Enquirer written upon his passing in 2016 at the age of 68.

Diamond Jim's card, along with two other apparent sponsor-linked cards in the set, Mason Dixon and Belinda Kay, are remarkable in that they really included nothing linking the personalities to the station, much less when Mudcats fans could even listen to them.

But Diamond Jim's identity could be determined through The Ledger-Enquirer article. Devitt went by that name, Diamond Jim, and also worked at South 106, the Mudcats set sponsor.

Devitt was born in 1947 in Buffalo, NY, before he later moved south. In the late-1960s, he went to Vietnam with C Company 4th Infantry Battalion as a Combat Medic, his obituary reads. He received his two Purple Hearts during his tour in 1969.

By the late-1980s, he was on the air in Columbus, Ga., at South 106. He had an evening show on the station, according to a previous version of South 106's Wikipedia page.

He went on to serve as promotions director at TV station WLTZ and he then opened his own advertising and communications business under the Diamond Jim Devitt name.

"He was so creative," friend and former colleague Mark Cantrell told The Ledger-Enquirer upon Devitt's passing. "Jim had so many jokes. He was just one of those personalities you love. Everyone knew 'Diamond Jim.' He was a great friend for many years." 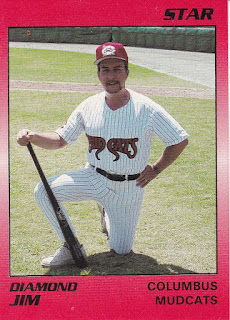