Originally published Jan. 8, 2014
Stuart Weidie helped his University of New Orleans team to its first College World Series birth in 1984 and he did it in grand fashion.

He did it by hitting a sixth-inning grand slam in the game that sent his squad to Omaha on a 6-3 New Orleans victory.

Weidie later went on to a new career, one in the gas industry.

Weidie's professional baseball career began in 1986, taken by the Red Sox in the 22nd round of the draft, out of the University of New Orleans.

Weidie has since become president and CEO of Blossman Gas, a company based in the Southeast. He started with Blossman almost immediately after stepping off the baseball field, according to his company profile, joining the company's management training program.

Weidie then worked his way up from store manager, business development manager and regional vice president, then, finally, to president and CEO. He also works with the Propane Education and Research Council and the National Propane Gas Association. He continues in that role in 2021.

He also leads an industry group Autogas for America, promoting propane as an auto fuel. Speaking to The New York Times in 2011, Weidie promoted support for propane as an alternative fuel for cars.

Natural gas "is getting all the publicity, and we don't want to be disadvantaged," Weidie told The Times. "We're not an experimental deal. We're here, we're available." 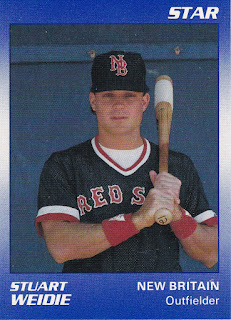