Originally published Jan. 2, 2014
Dave Owen was a left-handed pitching prospect, a player the Red Sox had a chance to deal at the deadline in 1990, but held on to.

By spring 1991, though, that prospect label had gone, taken by injury, according to the Associated Press.

"He hurt it pitching in winter ball, and it's still there," Red Sox manager Joe Morgan told the AP early that March. "It doesn't look like he'll be doing any pitching for a while."

All that came after the Astros wanted Owen or one of two other lefties in a deadline deal with the Red Sox in 1990. Instead, the Astros had to settle for Jeff Bagwell.

Owen's career began in 1988, taken by the Red Sox in the seventh round of the draft, out of Carson-Newman College in Tennessee.

When the Red Sox decided to keep Owen, he went to winter ball, then injured his shoulder. In 1991, Owen got just three starts between Winter Haven and Pawtucket. 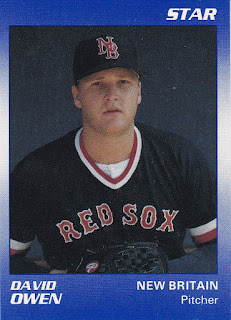