Jose Munoz waited nine full seasons to make the bigs; Made it for 17 games, found it great 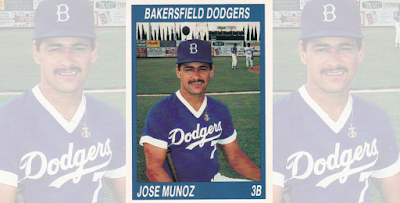 Jose Munoz played a long time in the minors before he got his shot at the bigs, nine full seasons.

Then, when he made it in 1996 with the White Sox, he spent two full months there, The Nashville Tennessean wrote.

"I understand that sometimes you have to wait," Munoz told The Tennessean that June, after he'd returned to AAA. "Playing up there this year was great, though. It makes you want to play there that much more."

For Munoz, though, he didn't get back to the bigs. Those two months in the majors, amounting to 17 appearances, proved the extent of his major league career.

Munoz' career began in 1987, taken by the Dodgers in the 20th round of the draft out of Florida College.

Munoz started with the Dodgers in the rookie Gulf  Coast League. He hit .321 in 54 games. He moved to single-A Bakersfield for 1988 and played all of 1990 at high-A, between Bakersfield and Vero Beach.

He split 1991 between AA San Antonio and AAA Albuquerque. He started well in May after his move to Albuquerque, according to The Albuquerque Journal.

"The pitchers here are constant around the plate," Munoz told The Journal then. "I've been making pretty good contact. With batters on base, I just tried to relax, and hit the best pitch."

He then signed with the Red Sox for 1994 and played at AAA Pawtucket, then the Braves and AAA Richmond for 1995. For 1996, he signed with the White Sox, and made the majors.

In his 17 games in Chicago, Munoz hit .259 and had one RBI. He then played the rest of the year at AAA Nashville.

Munoz continued playing after that, but in Mexico. He's last credited as playing in 2001, with Cancun. 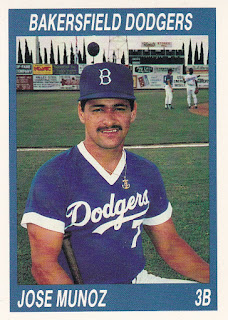