Dinger the Duck had some competition in Niagara Falls as mascot; He and team stayed five seasons

Niagara Falls got an affiliated team back in the NY-Penn League in 1989 and the club's new GM Thomas Prohaska explained the organizational goals to The Buffalo News.

"We want to provide low-cost family entertainment and good quality minor-league baseball," Prohaska told The News. "We want it to be family fun that's clean and safe."

One aspect of family fun at the ballpark has to be a mascot and for the Niagara Falls Rapids, that role was filled by Dinger the Duck.

Dinger the Duck first graced Sal Maglie Stadium in Niagara Falls in 1989. He got his only card in 1990, the front of the team checklist.

At the start, though, he had some competition. While Dinger was the team's official mascot. The club also had an unofficial one in Joe DeDario, The Boston Globe wrote. (More on DeDario)

The Rapids' stay - and Dinger's - lasted through 1993, when the club departed for Jamestown. In Jamestown, Dinger's services were no longer needed. The club, renamed the Jammers, replaced Dinger with their own mascot, J.J. Jammer. 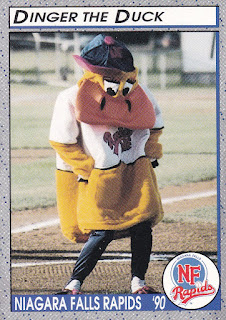