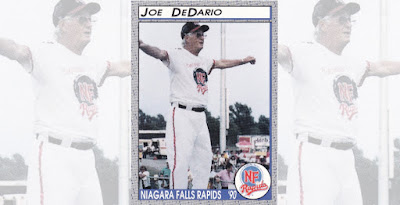 Speaking to The Boston Globe in 1990, Joe DeDario explained why he went to the ballpark for the Niagara Falls Rapids each night and performed as "Joe Rapids."

"I do it because I love it," DeDario told The Globe. "I just wish I were young again. There are so many other things I'd love to do."

DeDario served as the Rapids' unofficial mascot, climbing onto dugouts, dancing, dropping his pants, throughout their brief existence. Before the Rapids, he also performed as Whitey Sox for the previous Niagara Falls Sox.

Before he was Niagara Falls' baseball entertainer, DeDario served in World War II and worked at a chemical plant and as a maintenance foreman at the local airport, according to his obituary. He passed away in 1999 at the age of 82.

He also performed on the side as a comedian in local supper clubs, his obituary read. His 1990 card back bills him as a former Vaudvillian, as well as the club's official game host.

Toward the end of his working career, DeDario took up residence at Niagara Falls Sal Maglie Stadium as a performer. In addition to his work for the Rapids and Sox, he also performed for the Niagara Falls Pirates, who called Niagara Falls home from 1970 to 1978.

When the Sox left after the 1985 season, Niagara Falls and DeDario had to wait until 1989 to get a team again. The return of baseball also came with calls for DeDario to return, which he did, according to The Buffalo News.

"He's wonderful with kids," Niagara Falls GM Thomas Prohaska told The News. "We've had several calls from people saying, 'If you bring back one thing, bring back Joe DeDario.' "

DeDario continued entertaining fans at Niagara Falls games until the team left town following the 1993 campaign. The team honored him with his own night during the club's final season in Niagara Falls. 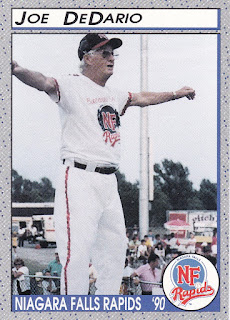