The Intercounty Baseball League's Burlington Herd moved to Welland, Ont., and Welland Stadium for the 2019 season and team part owner and Welland Baseball CEO Ryan Harrison described the organization's excitement in a release, according to The Welland Tribune.

"We have already seen a tremendous amount of support from the city, and we are very happy to be playing out of a first-class facility that will be one of the best in the league," Harrison said, according to The Tribune.

The move marked the return of higher-level baseball, in this case a summer league team known as the Welland Jackfish, to the city and Welland Stadium after years of absence.

Welland Stadium has seen teams at multiple levels since it opened in 1989, but the highest level team was the team that first called it home, the Welland Pirates.

Welland gained the team - and stadium - as the Pittsburgh Pirates moved their short-season affiliate from Watertown, N.Y. to Welland.

The stadium has a capacity of 2,500 spectators and has also seen time as home to an independent team, the Welland Aqua Ducks and Niagara Stars, as well as the Welland Jackfish. The Pirates stayed for six seasons, before the club moved to Erie, Pa.

In 2013, the stadium continued as home to an annual pro baseball tryout as scouts checked out local talent, including those from Welland's Bullett Proof Baseball Academy. (Bullet Proof continues to be headed in 2020 by 1990 Welland Pirate alum Scott Bullett)

"They've seen me here before, and they look for potential. They look at what you will be in the future," local player and Bullett Proof player Nick Spillman told The Niagara Falls Review.

The Welland Jackfish debuted at Welland Stadium in 2019 and called back to the stadium's origins in July as they played in Pirates-themed jerseys - and snapped a losing streak in the process.

An original Welland Pirates season ticket holder, Mike Konderka, bought 1,000 tickets to the game and gave them away, according to The St. Catharines Standard.

"We all had season seats. It was awesome when it came here," Konderka told The Standard of Welland Stadium. "The sounds, the sights, the smells. They're fond in my memories." 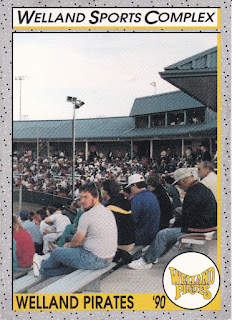