Scott Bullett had a big night for the Cubs in 1996; Played in four ML seasons in 19 pro campaigns 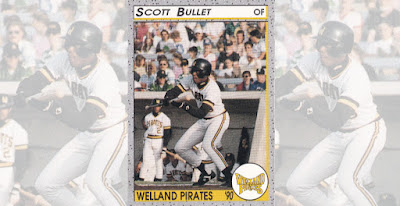 Scott Bullett had himself a big night for the Cubs in this June 1996 game for the Cubs, big as in he went 5 for 5, according to The Associated Press.

Bullett, in his fourth season with time in the majors and second with extended time, tried to explain his fortune afterward to The AP.

"Every pitch that came, I was right on it," Bullett told The AP. "I think they couldn't have thrown a golf ball by me."

Bullett had been seeing pitches in the pros by that time for nine seasons. He went on to see pitches in 10 more campaigns as he extended as he made stops in Taiwan, Japan, independent ball and Mexico. His major league career, however, ended with that 1996 campaign.

And, for all the stops along his 19-season professional career, there was one that the West Virginia-native Bullett later returned to - Welland. He met his future wife there in 1990 and the pair later settled back in the city.

Bullett's career began in 1988, signed by the Pirates as an undrafted free agent out of Martinsburg High School in Martinsburg, W.V.

Bullett started with the Pirates in the rookie Gulf Coast League. He played there two seasons, then arrived at short-season Welland. He hit .302 at Welland over 74 games. He also stole 30 bases.

Bullett played 1991 at single-A Augusta and high-A Salem. He hit .284 in 95 games at Augusta, with 48 stolen bases. That September, he skipped over AA and AAA and became a September call up to Pittsburgh.

Bullett got into 11 games, scored two runs and stole a base for the Pirates. He also went 0 for 4.

He played 1992 largely at AA Carolina, then 1993 at AAA Buffalo. He returned to Pittsburgh that July and got into another 23 games with the big club. He went 11 for 55, with three stolen bases.

Aside from those rare nights he got to start - like that 5-for-5 game- Bullet served mostly in a pinch-hitting role in 1996, until an injury to Sammy Sosa in August gave him an opportunity. He hit an early home run.

"I was playing pretty good last year (as a starter) until they traded for (Luis) Gonzalez," Bullett told The Chicago Tribune. "I've tried to drill it into their heads I'm an everyday player. Now I'm going to get another chance to show them."

That season marked Bullett's last with time in the majors. But he continued playing. He played 1997 with the Orioles at AAA Rochester, then 1998 in Taiwan and 1999 in Mexico. He also briefly saw time at independent Allentown in 1999.

He saw brief time at AAA Colorado Springs in 2000 and 2001, while also seeing Mexico. In 2002, he played for Chunichi in Japan. He then finished out his career with four more seasons in Mexico. He's last credited as playing for Tabasco in 2006.

Bullett then settled back in Welland with his wife and three children. He also opened his own training facility, Bullett Proof Baseball in Welland. 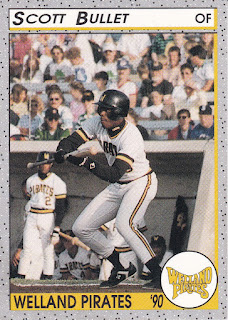