Grewal recorded 10 wins for the Bulldogs and a 3.08 ERA, both marks no teammate beat that year. But he also showed some control issues, throwing 16 wild pitches that year that is now tied for the highest all-time at the school, the fact book reads.

Grewal took those numbers from Fresno State on to the pros. His pro career lasted five seasons. He briefly saw AAA twice, but he never saw the majors.

Grewal's pro career began that year in 1990, taken by the Expos in the 26th round of the draft out of Fresno State.

Grewal started with the Expos at short-season Jamestown. He went 0-3 over 19 outings, one start, with a 2.72 ERA.

Grewal also got his first brief look at AAA in 1991, two outings at Indianapolis. He gave up two hits over three innings of work, but no runs.

He played 1992 at high-A West Palm Beach. He also saw one more game at Indianapolis. He gave up three earned in 1.2 innings of work. That season marked his last in affiliated ball. 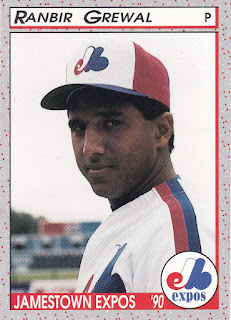