Woody Smith later gave advice to his cousin on life in the minors; Neither made the bigs 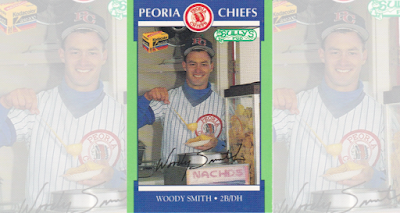 Newly minted minor leaguer Chris Morris spoke in 2001 about the person he turned to for advice - his cousin and former pro player Woody Smith, according to the site Top Prospect Alert.

"He told me how the first professional season was going to be. He told me to take your good days with your bad. I've idolized him ever since I was 10 years old," Morris told the site.

Morris went on to play a total of six seasons in the pros, but despite the advice Smith gave him, he never reached AA.

Smith made the pros a decade earlier, but didn't make it as far. Smith played three seasons. He topped out at single-A.

Smith's career began in 1988, taken by the Cubs in the 20th round of the draft out of Spartanburg Methodist College in South Carolina.

Smith's home runs at Spartanburg Methodist appeared to help lead The Chicago Tribune to include Smith on a list of players at rookie Wytheville that the organization expected some power from.

Smith knocked in two runs in an August win for Wytheville. Overall, he hit .267, with seven home runs and 29 RBI.

He moved to single-A Peoria for 1989 and played the end of the year at single-A Charleston. In 107 games between them, he hit .221, with another seven home runs and 40 RBI.

Smith returned to Peoria for 1990. He got into 89 games (and apparently served up at least one plate of nachos, at least in his card photo).  He hit .230, with four home runs, one of those in a July game, part of three-consecutive Peoria batters to do so. That season in 1990 turned out to be his final as a pro. 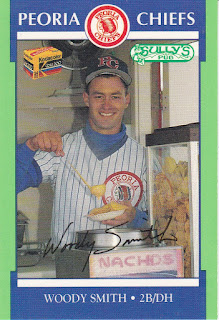