Sully's Pub in Peoria had its share of sports memorabilia; It also sponsored the Peoria Chiefs' 1990 team set

Sully's Pub in Peoria was an Irish pub, but also a pub with its share of sports memorabilia from around the world, according to one description.

One of the sports-themed pieces even appeared to be a Sully's menu autographed by St. Louis Cardinals great Stan Musial.

So, with that, sponsoring the Peoria Chiefs' 1990 team issue card set would seem to be a natural.

"Peoria's Irish Embassy" also got its own card in the set as part of the deal, including a photo at its front door with four team members, players Jay Eddings and Matt Franco, manager Greg Mahlberg and pitching coach Lester Strode.

The card back included the tag lines "Some people are born to party," "Sully's is the Place" and "Because grown-ups don't have school nights."

Sully's was founded in 1978, 12 years prior to the Peoria Chiefs set sponsorship, by Mike "Sully" Sullivan, according to a Yelp history. The place originally opened as Eddie's Cafe, before being rebranded as Sully's, according to one source, in 1984.

A Peoria Journal-Star columnist called the Vietnam veteran Sullivan "Peoria's premier saloonkeeper" upon his passing in 2010. Sully's was one of several bars he started or owned in the Peoria area.

"Sully's Pub and Café is known for it eclectic sports memorabilia and 'Cheers' ambiance along with a friendly staff," the Yelp history reads.

Sully's remained open in downtown Peoria for 23 more years after they sponsored the Chiefs set. Back taxes - $174,000 worth - led to it losing its liquor license in 2013, according to The Peoria Journal-Star. It closed shortly afterward.

Nearly five years after it closed, the local blog "Meanwhile, Back In Peoria" visited and found the place virtually unchanged since the day it closed.

The blog's photos even showed the "Irish Embassy" sign, apparently the same one from the 1990 card, though with some color added. 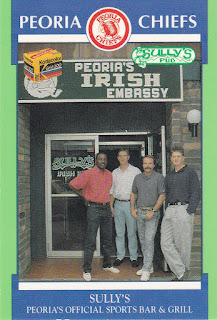