Originally published Aug. 15, 2012
Mark Ryal made the Phillies out of spring training in 1990 not so much for his bat, The Philadelphia Daily News wrote, but because he could sit, and stay ready.

It was a role Ryal had proven himself in before, he told The Daily News.

"I did it in Anaheim (Calif., with the Angels) and was successful out there," Ryal told The Daily News. "It's not an easy job to do. The guys that do it are usually guys that have been around."

Ryal had been around in some capacity or other since 1978, when he was taken by the Royals in the third round of the draft, out of Dewar High School in Oklahoma.

He would stay around until 1992, last recorded as playing in Japan, with Chunichi. And Ryal has stayed around in the game, in the college game. He's coached both college baseball and softball, listed for 2012 as the assistant softball coach at Auburn.

It was also in 1982 that Ryal made his debut in Kansas City. Ryal got into six games that September, getting one hit in 13 at bats.

Ryal, though, returned to Omaha for 1983 and 1984, without returning to Kansas City. He didn't get back to the majors until 1985, when he signed as a free agent with the White Sox.

With the White Sox, Ryal got 12 games in Chicago in July. He picked up five hits in 33 at bats. For 1986, Ryal signed with the Angels, the team with which he would see his most playing time in the majors.

He got into 13 games with the Angels in 1986, going 12 for 32. He also knocked in the game-winning run in one mid-September contest.

"I didn't go up there looking for a fastball or a curve or a changeup," Ryal told UPI after that game. "I figured that I should just try to hit whatever I got."

For 1987, Ryal returned to the Angels, getting into 58 total games. Ryal hit five home runs on the year. Two of them came in one May game. Another came in September, when he hit a pinch-hit grand slam.

Ryal missed the majors in 1988, then returned for 29 games with the Phillies in 1989. His big league career then ended in 1990, with six final games played with the Pirates.

He started his coaching career in 1995, at the University of Oklahoma as hitting coach for their baseball team. BY 2003, he was coaching high school softball in his home state of Oklahoma. In 2009, he joined the Auburn softball program as assistant coach.

Ryal's son Rusty Ryal has also followed his father into the game, and to the majors. Rusty Ryal played with the Diamondbacks in 2009 and 2010.

With Auburn, Ryal told The Auburn Plainsman that his major league experiences plays an important role in his coaching of the Auburn women.

"I try to help the girls by sharing some of the knowledge that I accumulated over playing 16 years of professional baseball," Ryal told The Plainsman. "Some of these situations in softball aren't any different than situations in baseball." 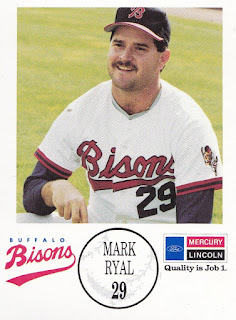