Originally published July 8, 2011
Mark Ross' expectations at the start of the year hadn't been so high.

But, in August 1990, after spending time with the Pirates in Pittsburgh, they wanted him back.

"I was just wanting to make the Buffalo team in spring training," Ross told The Pittsburgh Post-Gazette after being recalled. "This is more than I thought would happen. Of course, everybody would want to stay up here all year. But even though this is not the ideal, it's better than nothing."

Ross' return to Pittsburgh got him a few more days in the majors. But he had already pitched his final game in the bigs. His career ended, having pitched in a total of 27 games in relief, over six major league seasons.

Ross' career began in 1979, taken by the Astros in the seventh round of the draft, out of Texas A&M University. He started that year in the rookie Gulf Coast League. He moved to single-A Daytona Beach and AA Columbus for 1980.

By early July 1980, Ross was being called Daytona Beach's staff "relief ace" by The Daytona Beach Morning-Journal. In 30 outings there, Ross posted a 1.71 ERA.

In Houston that September, Ross got into four games and six innings. He gave up one earned run, for a 1.50 ERA. 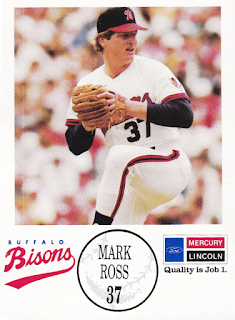 Ross returned to the minors for 1983, getting into only 19 games between Columbus and Tucson. He got back to Houston in 1984, getting his first major league win. That win came with one inning of work Sept. 1 against the Cardinals.

Ross' first major league save came the next season, saving one of Nolan Ryan's 324 wins, getting the final out of a May win. He got into eight games in 1985, giving up seven earned runs in 13 innings.

Ross didn't make it back to the majors this time until 1987, pitching a single game with the Pirates. He gave up a run in one inning of work. Moving on to the Blue Jays in 1988, Ross got into another three games, giving up four earned runs in 7.1 innings.

His final major league run came in 1990, back with the Pirates. He got called up in June, then again in August. Sent back down Aug. 20, Ross didn't return. One more year, with the Braves at AAA Richmond, and Ross was done.

Ross has gone on to be a minor league coach and scout. In 1997, Ross served as pitching coach at single-A Macon. Included in his rotation that year was a young Bruce Chen and a young Jason Marquis, according to The Rome News-Tribune.

"Look at some of the other organizations," Ross told The News-Tribune, talking up his five-man rotation at Macon. "They would probably be begging for one or two of these guys. We probably run five pretty good starters and some pretty good relievers out there, too."