Jac Gelb hoped to replicate his first minors season in his second; He played just those two pro campaigns

To start 1990, Gelb told The Orlando Sentinel he hoped to replicate that success.

"I don't really think I could have had a better season," Gelb told The Sentinel. "I'd like to have that kind of success again."

Gelb played that upcoming season between single-A Peoria and short-season Geneva. However, he couldn't replicate that early success. That second pro season turned out to be his last pro season.

Gelb's career began that year in 1989, signed by the Cubs as an undrafted free agent out of Florida Southern College.

Gelb went to Florida Southern out of Leesburg High School in Florida. He picked up a summer league win in June 1985.

At Florida Southern, Gelb helped the school to the Division II in 1988.

Gelb returned to Wytheville years later and recalled what he achieved, and what he missed.

"It was pretty cool being there and reflecting back," Gelb told The Bristol Herald Courier in 2019. "Funny thing is as a kid playing back then, I was so focused on baseball, I did not realize the beauty of the backdrop of the surrounding mountains and the area’s offerings. It was nice to experience it both as a player and now as an adult."

Gelb then played 1990 between Peoria and Geneva. He went 4-7 overall, with a 4.63 ERA between them to end his career. 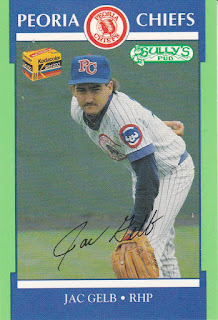