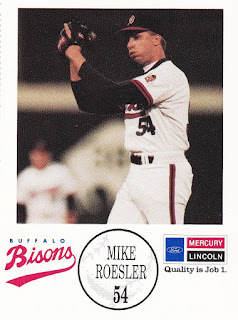 Mike Roesler joined his new team in spring 1990 and one of his new teammates, Tom Prince, offered praise, as he'd faced Roesler previously joined the Pirates in spring training 1990, sent there in a trade by the Reds, according to The Pittsburgh Post-Gazette.

"He has nasty stuff," Prince told The Post-Gazette. "He's got a good fastball and a pretty good slider and forkball."

Roesler joined the Pirates that year after seeing 17 outings the previous season with the Reds. He went on to see five relief appearances with the Pirates in 1990. Those appearances would be his last in the bigs.

Roesler's career began in 1985, taken by the Reds in the 17th round of the draft out of Ball State University.

His loss came in an August game as he gave up an extra-inning home run to the Cubs' Andre Dawson.

"I just made a bad pitch on an 0-2 count," Roesler told reporters afterward. "It was my job to get the ball inside to Dawson and I got it right over the plate."

Roesler then got into his five games with the Pirates in 1990. He gave up two earned runs in six innings. He also picked up his only major league win. All five of his appearances came that April.

He played 1992 between Buffalo and AAA Omaha in the Royals system. His time in the Pirates organization ended in frustration as he responded to a taunting fan with an obscene remark and gesture, according to The Buffalo News.