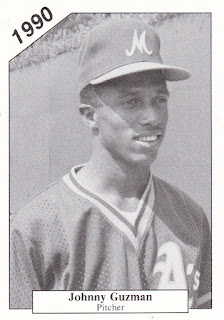 The Oakland Athletics added some veterans to its pitching staff for 1992, Oakland general manager Sandy Alderson told The Fort Worth Star-Telegram that March.

The aim, Alderson told The Star-Telegram, was to protect younger pitchers in the Oakland system from being rushed.

"We don't want to be in position where we have to rush anybody," Alderson told The Star-Telegram. We saw enough of that last year (when youngsters Bruce Walton, Johnny Guzman and John Briscoe were force-fed because of injuries) that we don't want to see it again."

One of those pitchers, Johnny Guzman, saw his major league debut the previous June at the young age of 20. But, in five relief outings, totaling five innings of work, Guzman gave up five earned runs and 11 hits.

Guzman's professional career began in 1988, signed by the Athletics as a free agent out the Dominican Republic. He played that first year in the Arizona Rookie League. In 16 outings, his ERA of 8.61.

He divided 1989 between a number of teams, short-season Southern Oregon, single-A Madison and Modesto. He also spent time in the Arizona Instructional League, sent back there in May. He was 0-2 with Modesto and he needed to strengthen his arm, The Modesto Bee wrote.

Between Southern Oregon, Modesto and Madison, Guzman went 6-6, with a 3.61 ERA, used largely as a starter.

He played 1991 between Huntsville, AAA Tacoma and, more importantly, Oakland. With Tacoma, Guzman went 2-5 with a 6.78 ERA in 17 outings. That ERA took a hit in May when he went 3.2 innings in relief and, hung out to dry with the game already out of control, gave up 12 earned runs.

Still, injuries in the majors led to Guzman's call up in June. In his debut, Guzman gave up a run-scoring single to the only batter he faced. He got his first and, what would turn out to be his only win a couple days later. He again faced just one batter, but got credit for the win.

In late June, Guzman gave up seven hits and three runs to the Red Sox in two innings of work. Guzman spent the rest of the season in the minors.

He returned in 1992, getting two more outings in June, his final two in the majors. In three innings of work, Guzman gave up four earned runs. He gave up those four earned runs against the Twins in two innings June 27. His last outing came the next day, with an inning of work and two more hits given up.

Guzman's career lasted just one more season. He got 20 outings, 16 of them starts, at AAA Tacoma. His ERA that year hit 7.32, marking the end of his career at the age of 22.