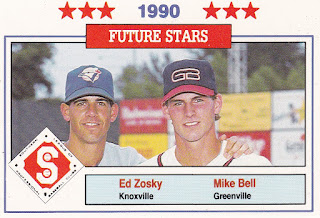 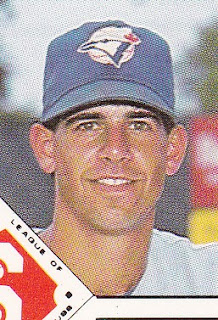 Eddie Zosky told himself to drive the ball up the middle, Zosky told reporters later in a wire account. Or maybe he should hit it to the right side.

What he ended up doing in this September 1991 game, was hit it to center for a single and his first two major league RBIs.

"It was the first time I didn't look back to see if they were going to put in a pinch hitter," Zosky, his big league career barely two weeks old, told reporters in the wire account. "I felt like I was going to be hitting and they let me. It was a real confidence builder."

Zosky took that confidence and ended up playing in five different big league seasons. His big league time in those seasons, though, would be limited. The 18 games he saw with the Blue Jays in 1991 would be the most he would see in any one campaign.

Zosky's career began in 1989, taken by the Blue Jays in the first round of the draft, 19th pick overall, out of California State University Fresno.

Going into 1991, Zosky was thought to be a candidate for the Toronto starting shortstop spot, according to The Boston Globe. Instead, though, Zosky was sent to AAA Syracuse.

"I just had a lot of negative thoughts," Zosky told The Globe of his 1991 spring. "They were saying in the papers that I had a chance to win the job, and I kept thinking to myself, 'Don't blow it. Don't make an error, don't throw this ball away.' And you can't play that way."

Zosky did make Toronto that year, but it wasn't until that September. In 18 games for the Blue Jays, Zosky hit just .148, getting just those two RBIs.

Zosky returned to the Blue Jays for 1992, but again not until September. This time, he got two hits in seven at bats.

Zosky didn't make it back to the majors until 1995, after a trade to the Marlins. Along the way, he had an abbreviated 1993, having bone chips removed from his shoulder early in the year. He played 1994 completely at Syracuse.

With the Marlins in 1995, Zosky got into six games, picking up one hit. He then saw eight games with the Brewers in 1999 and four games with Houston in 2000, rounding out his big league career.

In spring 1998, a year that Zosky spent entirely at AAA with the Brewers, Zosky kept his sense of humor. He kept even after becoming the first Brewer to get hit by a pitch in an inter-squad game, according to The Milwaukee Journal Sentinel.

"He apologized right away," Zosky told The Journal Sentinel of the offending pitcher Jeff Juden. "I was going to charge the mound, but then he apologized, so everything was OK."