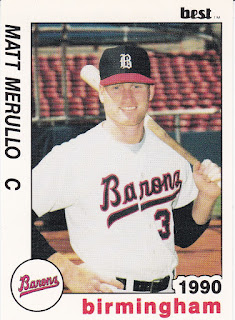 Matt Merullo made the call. It was one he'd made many times before. His team, the Arizona Diamondbacks had just taken one of the players he'd scouted in the 13th round, this past June.

The call was to inform the pick, New Hampshire's Kevin Ziomek, that he'd been drafted.

"Kevin's got that look," Merullo told the Daily Hampshire Gazette. "He's got that look like he knows what he's doing and I can see him having a long, successful career in the big leagues. Each player has his own path of getting there."

Merullo took his own path to the majors more than 20 years earlier, making the majors with the White Sox in a career that spanned six major league seasons and led to his current career as a scout.

It was in 1986 that Merullo received a similar call, when he was taken in the seventh round of the 1986 draft by the White Sox. He started his career at class-A Peninsula. He made AA Birmingham in 1987, promoted ahead of the Florida State League All-Star game he'd won a spot in playing for Daytona Beach.

But by spring 1989, Merullo was being talked about for the major league roster, as the back up for Hall of Famer Carlton Fisk. Merullo had the bat, but his opposition, Ron Karkovice, had the glove, according to The Chicago Tribune.

Karkovice won out, but then Fisk broke his hand and Merullo got the call.

"I really don't know what their expectations are," Merullo told The Tribune at the outset. "It hasn't really sunk in yet that I'm here."

He was up for two months, but the bat he'd shown earlier didn't show up. He hit just .222 in 31 games. After his stint in Chicago, it was back to AA for Merullo. He was there again for 1990.

It wasn't until 1991 that Merullo got a shot at the majors again. That year, he played the most he'd ever play, 80 games for the White Sox. He hit .229 with five home runs. One of those home runs came on the final day of the year. Another came back in May to tie a game. He hit it with two strikes and two outs in the ninth inning.

"I had a ton of family and friends in the stands," Merullo told the Associated Press. "It's great to have something like this happen in front of them. It'll stay with me the rest of my life."

In 1995, in what would be his final year in the majors, Merullo played in 76 games for the Twins. In one of those games, in September, he helped beat his old team the White Sox with a ninth-inning single.

One more year in the minors and Merullo was was done. After a brief time out of baseball, Merullo got back in, writing letters to all the teams. The Diamondbacks were the only ones to give him an interview, according to The Enterprise Newspapers.

Now, Matt Merullo's son is looking to make a run at the majors, and turn the heads of scouts, according to MaxPreps.com.

"As a father I’m old fashioned," Matt Merullo told MaxPreps. "I’m not whipping out money for him to be on a special (travel) team. I’m really proud of him. He’s been through a lot. He hasn’t had anything handed to him.”