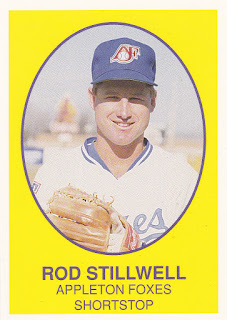 In his second season as coach at Thousand Oaks High in California, Rod Stillwell had his team in the league championship game for the first time in school history, The Los Angeles Times wrote.

He did that, he told The Times, by getting the most out of his team.

"Not everybody can be a superstar as far as being able to throw 90 mph or hit .400 or .500, but everybody can hustle," Stillwell told The Times. "I didn't have all the talent in the world; I had to work hard and get every ounce of talent from myself. I'm trying to instill that in my players."

Stillwell's talent took him from college to the pros. In the pros, though, it only took him to two seasons. He never made it out of single-A.

Stillwell's professional career began in 1989, taken by the Royals in the 61st round of the draft out of the University of Arkansas.

The selection meant the Royals added another Stillwell to their collection. In Kansas City, they already had Stillwell's brother, Kurt Stillwell.

Stillwell started his college career at Oral Roberts University and, by the end of his freshman year, he was in the starting lineup.

At Arkansas, Stillwell helped the team to a fourth place finish at the 1989 College World Series, hitting .351 along the way.

Stillwell knocked in a run in a February game for the Razorbacks and he scored a run in a March game.

With the Royals, Stillwell started at single-A Appleton. The infielder hit just .207 in 47 games. He knocked in seven.

Stillwell later went into coaching. By 2002, he was head baseball coach at his hometown high school, Thousand Oaks. In 2011, Stillwell was coaching girls golf, according to The Thousand Oaks Acorn. His girls golf team won the league that year.

"They're having a lot of fun right now," Stillwell told The Acorn as the team prepared for sectionals. "It's a fun group to be around. Their personalities are competitive, but at the same time they have the right mentality for golf, for making the right changes and moving on to the next hole or the next shot."