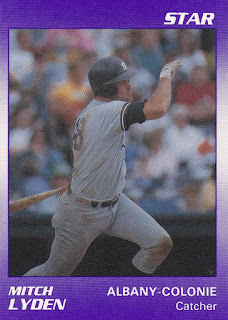 Mitch Lyden swung. The only thing in doubt then was whether the ball would stay fair, The South Florida Sun-Sentinel wrote.

"I couldn't have scripted it any better," Lyden told The Sun-Sentinel. "Wrigley Field. The mystique. But it could have been more sweet if we had won the game."

For Lyden, though, that home run would be his only home run in the majors. Having finally made the bigs after a decade in the minors, but the script Lyden hoped for didn't play out. Lyden only got into five more major league games.

Lyden's trip to that first-at-bat home run began in 1983, taken by the Yankees in the fourth round, out of Beaverton High School in Oregon.

With the Yankees, Lyden started at short-season Oneonta. He made single-A Fort Lauderdale in 1985, then first hit AA Albany in 1986. He suffered a knee injury late in that spring training, not hitting the field until that July, The Schenectady Gazette wrote.

"There's no telling where I'd be if I hadn't been injured," Lyden told The Gazette after he joined the team. There were a lot of injuries in New York and at Triple-A. That's what hit home the most."

Lyden did make AAA, the next season. But he never did make New York. He stayed with the Yankees system through 1990, getting a second look at AAA that season, at Columbus.

After that, he saw AAA each season through 1995. It was in 1993, that he saw the majors, with Florida. After his call up, Lyden told The Sun-Sentinel what his hopes were.

"I just want to stay up here as long as I can, but I'm not too sure how long it will be," Lyden told The Sun-Sentinel. "This is my ultimate goal, to be sitting right here."

Lyden ended up getting just 10 at bats, nine after that home run. He got two other hits, ending his major league career.