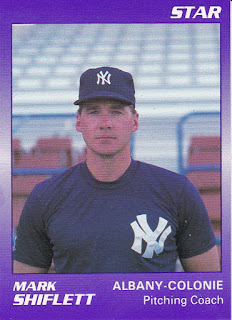 The topic: The top overall selection in the 1991 draft, the Yankees' Brien Taylor.

"The Yankee philosophy is don't rush these kids -- let them have success and enjoy where they are," Shiflett told The Sun-Sentinel. "Brien Taylor's going to be successful here, and he's going to learn a lot. For a kid who hasn't had any college experience, he's got some games to get under his belt."

Shiflett watched over a pre-injury Taylor early on in his career as a minor league coach. Shiflett had his own career as a player. He got into six seasons and made AA. His coaching career spanned a decade, Shiflett spending much of that time at high-A.

Shiflett's pro career began in 1981, taken by the Yankees in the 27th round out of Auburn University.

Shiflett started with the Yankees at short-season Oneonta. The hurler got into 12 games, starting seven. He had a 4.15 ERA. He moved to single-A Greensboro for 1982 and improved his ERA to 2.42.

Shiflett moved to the Tigers and AA Birmingham for 1985, throwing a shutout on three hits that June. His final time as a player came in 1987 with the Royals at AA Memphis.

Shiflett returned to the game in 1990 at the spot where he started as a player. Shiflett served that year as pitching coach at Oneonta. He moved to single-A Greensboro for 1991.

Shiflett coached at Fort Lauderdale in 1992 and then high-A Prince William for 1993. That April, Shiflett liked what he saw in his young pitchers, according to The Fredericksburg Free Lance-Star.

"We're loaded," Shiflett told The Free Lance-Star in the preview of a season that included a young Andy Pettitte. "This is a very strong pitching staff."