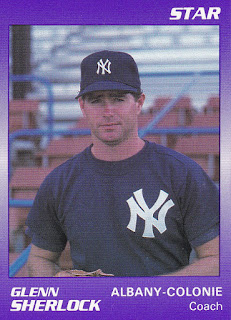 Asked about his tenure with the Diamondbacks in 2016, Glenn Sherlock laughed, according to AZCentral.

Sherlock had been hired by Arizona at the dawn of the franchise - in 1996 - and he stayed with the club two decades, mostly as a coach in the majors.

"I think I've been fortunate to be around a lot of good people and I've always tried to do my job well and not do anyone else's job," Sherlock told AZCentral. "I just think that’s the way to go about your business."

Sherlock has gone about his business in the game for more than three decades, first as a player in the minors and then as a coach and manager. He's spend much of his time as a coach in the bigs, first as a bullpen catcher for the Yankees, then bullpen coach and later base coach for the Diamondbacks and then the Mets.

Sherlock's career in baseball began in 1983, taken by the Astros in the 21st round of the draft out of Rollins College in Florida.

Sherlock started with the Astros with short-season Auburn. The catcher got into 35 games and hit .328. He made single-A Asheville in 1984, then AA Columbus briefly in 1986.

He moved to the Yankees system for an abbreviated 1987 and played 10 games between AA Albany-Colonie and AAA Columbus. He then finished his playing career with 38 games played between those two clubs in 1988 and one back at Albany-Colonie in 1989.

By 1990, he started his new career as a coach, serving that year as manager in the Gulf Coast League with the Yankees. He then managed at high-A Fort Lauderdale in 1991. Sherlock served as Yankees bullpen catcher in the Bronx in 1992, 1994 and 1995.

He joined the Diamondbacks as a roving catching instructor in 1996 and then became the club's major league bullpen coach when they hit the field in 1998. He continued in that role through 2002, including for the team's championship season in 2001.

Author Charles Euchner had Sherlock yelling for Randy Johnson to get ready in the eighth inning of Game 7.

"After one hitter, (Johnson) was ready to go," Sherlock told Euchner for the author's book on the game. "I was amazed at how quickly he warmed up."

Sherlock continued with the Diamondbacks, largely as bullpen coach, through 2016, when he joined the Mets. With the Mets, he's served as base coach and catching instructor. He continues as first base coach in 2019.

He went to the Mets with a reputation for working with catchers, according to NorthJersey.com. He soon went to work with Travis d'Arnaud.

"I see a real good athlete. That's what excites me the most about him. Usually athletes can do some pretty amazing things," Sherlock told NorthJersey. "He's an excellent receiver, really can catch the low pitch. I like how he moves behind the plate. We're working on a lot of things as with all the catchers."