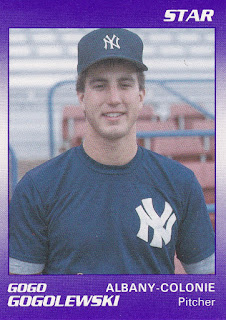 After five seasons in the Yankees' system with mixed success as a starter, Doug Gogolewski tried his hand at relieving.

Back at high-A Fort Lauderdale, Gogolewski posted a 4.27 ERA, losing five games. But he did save 17.

One of those games came May 30, against Vero Beach. Gogolewski struck out one in an inning of work. Gogolewski earned his seventh save on the year, saving the sterling effort by the Fort Lauderdale starter that day, young Yankees prospect Mariano Rivera.

Rivera, of course, would go on to experiement himself in the closing role, but the Gogolewski closing experiment didn't last much beyond his time with Fort Lauderdale. His playing career didn't last much longer either, ending in 1994, short of the majors.

Gogolewski's professional career began in 1987, selected by the Yankees in the fourth round of the 1987 draft out of Michigan State. Gogolewski played that first year at short-season Oneonta, where the starter went 3-7 with a 6.63 ERA. Gogolewski was also credited as Gogo Gogolewski.

He split the next year between single-A Fort Lauderdale and single-A Prince William, going just 5-11 between them with an ERA of 5.68. He went the distance in an April game with Fort Lauderdale, walking five and giving up three runs for the win, according to The Sun-Sentinel. In one May game for Fort Lauderdale, Gogolewski struck out seven in five innings.

Moving on to Prince William, Gogolewski had less success, going 1-9 with a 7.71 ERA. His seventh loss came in a mid-August game, giving up eight runs in 4.1 innings.

It all added up to control problems for Gogolewski, according to The Schenectady Gazette, with 181 free passes in 312 innings. In spring 1990, it appeared he had his control back.

"Gogolewski has been the surprise of the spring," Albany pitching coach Russ Meyer told The Gazette in early April. "He walked one in something like 18 innings, and that's something that got him in trouble last spring."

Promoted to AA Albany-Colonie, Gogolewski's control problems returned. By early May, he was 1-3, with a staggering ERA of 13.82, The Gazette wrote.

"He's got the ability to compete at this level," Albany manager Rick Down told The Gazette after a 13-6 loss. "I don't believe it's mechanical. But he threw 89 pitches in three innings, just 44 for strikes."

Soon, it was back to Fort Lauderdale. An abbreviated 1991 saw Gogolewski play six games in rookie Gulf Coast League. It was in 1992 when he came back as a reliever.

In 37 appearances for Fort Lauderdale posted an ERA of 3.52. He also earned a trip back to Albany with similar results as the previous trip. But, in 1993, he found his way at AA. He posted a 2.21 ERA and earned a 28-game promotion to AAA Columbus.

But his success came too late. It was his final year in the Yankees organization. He signed with the Giants for 1994, but his time there was brief, his career ending with three appearances with AA Shreveport.