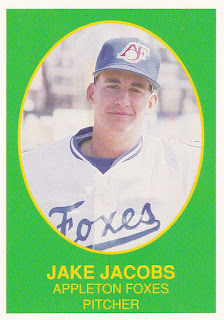 Jake Jacobs' pro career started at short-season Eugene as a reliever, The Eugene Register-Guard wrote. Then, in early August, he got his first start.

The change in roles had Jacobs a little nervous, he told The Register-Guard.

"You bet I was nervous," Jacobs told The Register-Guard afterward. "I signed (in the spring as a free agent) I didn't know how much I'd get to pitch, let alone start."

Jacobs ended up picking up the win that night and then started four other games down the stretch. He then started games each of the next two seasons. Jacobs, though, never got to start, or pitch, at AA. He played just those three seasons, never making it above high-A.

Jacobs' career began that year in 1989, signed by the Royals as a free agent out of East Carolina University.

At East Carolina, Jacobs threw consecutive no-hitters in late-April 1989. He was the first East Carolina pitcher to do so, according to The Wilmington Star-News.

With the Royals, Jacobs started at Eugene. In 20 outings, he started five games and ended with a 3.30 ERA. In a late-August start, Jacobs went seven innings, giving up just three hits. He went 2.2 scoreless in a July relief appearance.