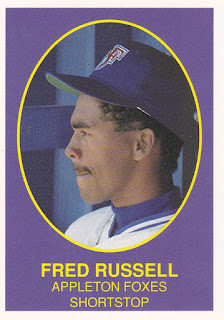 Fred Russell went 3 for 5, knocked in three and scored a run, helping the Eugene Emeralds to a wild 12-8 win.

It was enough for Eugene manager Paul Kirsch to single out the infielder for praise.

"Russell is playing the hell out of it right now," Kirsch told the Eugene Register Guard after the July 26, 1989 game.

While Russell was hitting well then, he never really hit well any other time. He also never made it to AA, let alone the majors.

Russell entered the Royals system in 1987, taken in the 51st round out of Compton Community College.

Russell's first taste of the minors came at short-season Eugene in 1988. Russell hit .272 for the Emeralds in 46 games. It would be his best batting average in four seasons.

As short-season Eugene began the season, Kirsch was high on his returning players, including Russell.

"The guys who were at extended spring should help us with their experience," Kirsch told the Register-Guard.

A couple days before the July 1989 praise from Kirsch, a Russell single led the Emeralds to a 3-1 win against Spokane.