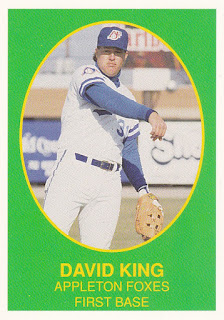 David King had multiple scouts watching him at Southwestern Louisiana University in 1989, according to The Eugene Register-Guard.

For King, which team selected him wasn't the issue, he told The Register-Guard.

"I didn't care what team I went with," King told The Register-Guard. "I just wanted to go out and play, get started with my career."

The team that selected King was the Royals. With the Royals, though, he didn't play long. His career lasted just three seasons. He never made it to AA.

King's career began that year in 1989, taken by the Royals in the 16th round. He went to college out of Asher High School in Oklahoma.

At Asher in 1984, King helped his team to the state championship. He hit a two-run home run in the championship game, according to The Oklahoman.

"I wasn't even looking for a curveball," King told The Oklahoman. "But it was right at the waist. I was afraid they were going to walk me, but I wanted a chance to hit."

With the Royals, King started at short-season Eugene. He hit .348 in games. He also knocked seven home runs. He helped Eugene to a June win with two home runs. He knocked in two with a single in a July game.