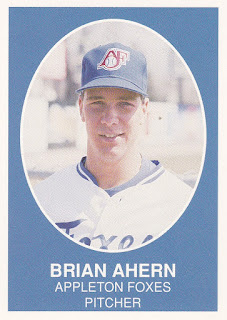 Pitchers in the pros see their pitches break bats frequently. In college, though, with bats made of aluminum instead of wood, broken bats are more rare.

But, in early 1989, that's exactly what happened to University of Central Florida pitcher Brian Ahern: In a practice game, a aluminum bat broke in two, according to The Orlando Sentinel.

"I think it was more the hitter. He swung, and the bat flew out toward me," Ahern told The Sentinel. "I've never seen it happen before, but apparently other people have."

Ahern soon had the chance to break bats in the pros, taken by the Royals in the fifth round of that June's draft out of Central Florida.

Ahern, though, would never get the opportunity to break bats in the majors, getting to AAA, but no higher.

Then came a surgery to remove a bone spur in his elbow. Ahern never pitched as well afterward, he told The Sentinel later.

Ahern moved to independent Thunder Bay in 1994, then tried his hand in replacement ball with the Blue Jays in spring 1995.

"I just want to put it (his arm) to the test and see where it's going to lead," Ahern told The Sentinel of why he was there that spring. "If I was in a situation doing well and with an organization, who knows, maybe my decision would have been a little harder and maybe even different. It's a no-brainer for me right now. I have no reservations about giving myself the best opportunity I can to succeed."

Ahern's opportunity, though, led to another year in the independent leagues, with the Texas-Louisiana League. It was his last year in the pros.