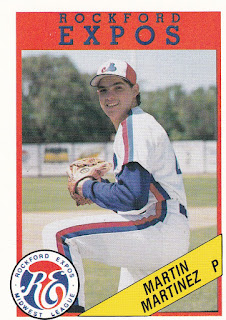 Cochise College starter Todd Youngblood nearly got the complete game. But, when he couldn't finish, Martin Martinez came in to close the door, according to The Associated Press.

Coming into the game with men on with two outs in the ninth inning and just a one-run lead, Martinez ended the game with a strikeout.

The stakes could hardly be bigger for the Arizona school. The club was fighting to stay alive in the 1989 National Junior College World Series.

Martinez pitched well enough for Cochise that year to get the notice of the Expos, and to turn pro. But Martinez couldn't pitch well enough to keep the door from closing on his career.

Martinez' career began that year in 1989, taken by the Expos in the ninth round of the draft, out of Cochise.

With Cochise, Martinez helped his club to that National Junior College World Series, but his - and his team's - luck would soon run out. After saving that one game, it was Martinez who was charged with the loss in the following game, a hit-by-pitch and double doing them in.

With the Expos, Martinez played his first season in the rookie Gulf Coast League. He went 2-4 in 10 starts, with a 4.67 ERA.

Martinez returned to Rockford for 1991, but it was a brief return. He got just eight starts, winning none and losing four. His ERA came in at 5.50. It was his final year as a pro.